AN ANNIVERSARY FULL OF HIGHLIGHTS

It was about time

The Porsche Design brand anniversary started in 2022 in the Porsche Museum with a spectacular start under the motto 'It's about time': 50 years of 'Engineered Passion' — a philosophy that always combines puristic design language with intelligent function. Founded in 1972 by Professor Ferdinand Alexander Porsche, Porsche Design has been developing products whose style is defined by timelessness for more than five decades.

A global campaign that honoured the past, celebrated the present and set the mood for the future — because:

"Eight theories on the consumption of the future"

A product like a watch doesn’t just tell the time these days. Values, convictions, and design philosophy are just as ubiquitous and relevant in a purchase decision. Carla Buzasi, CEO of London-based trend research agency WGSN, knows why this will be even more significant in future, with brands representing a whole lifestyle. She brings us along as she reveals the consumption of the future.
Read more

Everything within Porsche Design was and still is designed in accordance with the design principles set out by F.A.Porsche. These were the basis on which he explicitly claimed to create timeless design, setting out the path for products that are as innovative now as the day they were launched. Time to travel through the past 50 years of Porsche Design with its most iconic products.
Read more

We talk about 50 years of Porsche Design together with Porsche Design CEO Dr. Jan Becker and Chief Design Officer Roland Heiler. We cover iconic design from the past to pioneering designs that characterize the future.
Read more

From a process to perfection

Every day, our designers come up with hundreds of new ideas, but only one ultimately makes it into the Porsche Design Shops as a fully-fledged product. What has to happen in order to find the one and only right idea and send it through the design process until everything falls into place? Taking the example of the P'8928 sunglasses, we talk to our designers to reveal the processes behind our products and why no other alternative endings are possible.
Read more

The origins of Porsche Design are based in that era's zeitgeist. The Chronograph I of 1972 saw F. A. Porsche present his idea of good design: Functionality and consistency through streamlined design. This design was based on the Porsche 911 and represented a revolution. The approach of combining design and function as contrasts remains a feature of both brands today—ultimately, they have the same roots.
Read more

A designer who never set great store by fame and notoriety, and yet was one of the world’s best: Ferdinand Alexander Porsche.
To this day, his ideas and visions are the main component of Porsche Design DNA. We have carefully compiled his statements in interviews and journalistic profiles and the memories of his closest relatives in order to create an image of the personality that F. A. Porsche was, creative and multifaceted in equal measure.
Read more

The Comback of two Icons 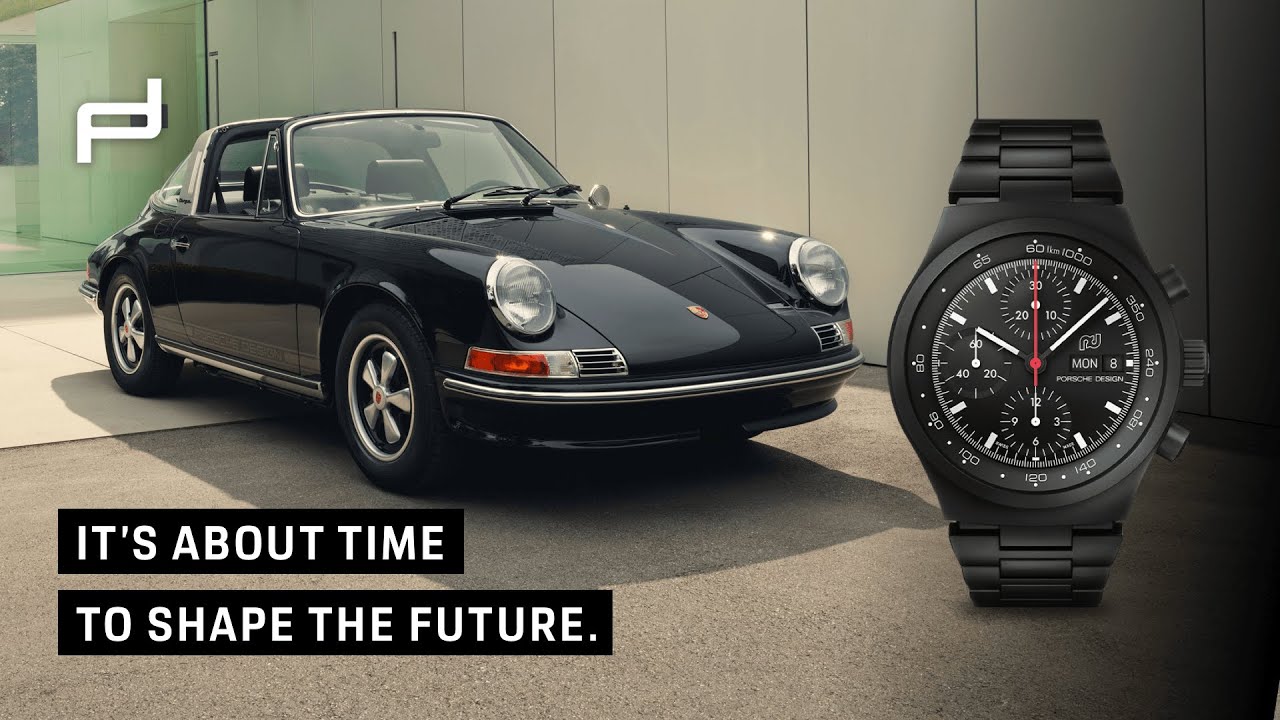 True to the anniversary motto 'It's about time', the extensively restored Porsche 911 S 2.4 Targa returned in impressive form. During the restoration of the classic, we succeeded in creating a special reinterpretation of the sports car. The signature of FA Porsche, founder of Porsche Design and designer of the legendary Porsche 911, can be seen down to the last detail on the restored model. The vehicle from 1972, the year Porsche Design was founded, seamlessly combined the original and the modern. The sports car was equipped with original historic fabrics and the houndstooth pattern in the classic colour scheme of Black / Cool Grey and, as a homage to the brand anniversary, the '50 Years Porsche Design Edition' embossing was featured on the dashboard and headrests, among other places.

In cooperation with the world's leading auction house Sotheby's, two unique design icons were offered at a joint auction as the crowning glory of the anniversary year: the extensively restored Porsche 911 S 2.4 Targa from 1972 as well as a special one-off from Timepieces — the Chronoraph 1 — 911 S 2.4 Targa, which also dates from the founding year of Porsche Design. The heritage watch and the exceptional Porsche were auctioned off as a bundle during New York Luxury Week 2022. The special design of the case back of the watch corresponds to the historic Fuchsfelge of the Porsche 911 S 2.4 Targa. A highlight: the VIN no. of the vehicle is also engraved on the chronograph 1.

The Chronograph 1, developed at the in-house watch factory in Solothurn, Switzerland, converts the wearer's wrist movements into energy to power the mechanical chronograph calibre in a rotation-optimised manner. In doing so, it builds a bridge to the 911 Targa and makes this timepiece a special one-off that honours the past, celebrates the present and leads the brand into the future:

'Because it's about time to shape the future.'

During the event, the legendary bundle could be bought at Sotheby's online auction.

Retrospective: down to each part.

The 911 T 2.4 Targa is dismantled down to the last screw. Every component is checked thoroughly and, if necessary, refurbished or replaced.

Reduction: down to the last paint particle.

The body is immersed in a bath where paint and primer are removed without leaving any residue. Since this work step also removes the rust, the true condition of the metal components is now apparent. Missing parts are restored to pristine condition as sheet metal is laboriously worked by hand. To craft and install them, the experts rely on traditional methods requiring special skills: spot welding, metal active gas welding (MAG) and brazing.

Shaping: according to all the rules of art.

To repair the body, the same original body techniques that were used in production in 1964 are again applied. To achieve maximum precision, we use the latest generation of frame straightening benches and computer-controlled laser measuring systems.

Avant-garde: immersion in the CDC bath.

For state-of-the-art rust prevention, the body-in-white is taken to one of the most advanced CDC lines: that of Porsche AG in Zuffenhausen. The integration of such capabilities into series production is unique in the world. To complete the body work, the perfect paint job is done in Black Uni. In addition, the Fuchsfelge rims are re-anodised.

New interpretation: of bar and roof.

As a special highlight, the Targa bar was coated in Satin Platinum instead of the original in brushed stainless steel. The Targa logo appears in Matte Black.

Craftsmanship: combining the new and the old.

Chequered surfaces contrast with the black leather in the interior of the unique car. At the same time, they resonate with the modern special model. A Classic Black / Cool Grey check pattern in Sport-Tex can be found, for example, in the door panels, in the lower area of the instrument panel and in the central panels of the seats. The strength and elasticity of the current fabric demanded all the skills of our upholsterer, especially when upholstering the 50-year-old seats. There is a “50 Years of Porsche Design” badge on the passenger side.

While the 911 T 2.4 Targa was built with 130 horsepower in its original state, the experts from Porsche Classic fully upgraded the engine and chassis to the S version. The model, top-of-the-line in its time, achieved 190 horsepower at 6,500 rpm with a displacement of 2,341 cm3 and featured mechanical fuel injection. Similar to the modern special 50Y Targa model, there is a “50 Years of Porsche Design” badge, featuring with a F. A. Porsche’s signature, attached to the grille of the engine cover at the rear.

The 911 S 2.4 Targa was thoroughly tested before it could be given to Porsche Design as a gift. Every detail was examined on the test bench, according to methods that are also used in part for current series vehicles. We also worked out the entire tuning with the same amount of effort as with a new vehicle. The final road tests were personally carried out by the Head of Porsche Classic Factory Restoration, Uwe Makrutzki.

As part of the Porsche Sonderwunsch (special request) programme, every year Porsche Classic restores, designs and refines a handful of unique sports cars – and does so with great craftsmanship and attention to detail. In future, these unique vehicles will be furnished with a special, one-of-a-kind seal that emphasises the exclusivity and individuality of the Sonderwunsch (special request) vehicle projects. One of the first factory One-Offs to receive this exclusive marking is the 1972 911 S 2.4 Targa, which was created in the Porsche Classic workshop to mark the 50th anniversary of the Porsche Design brand.

Be the first to discover more about limited-edition products, events, and promotions for our 50th anniversary.
Log in now